There have been some changes  in the latest versions of  WordPress and they affect the formatting toolbars, so I decided to start a new video series on WordPress Basics. Here is the first in the new series. The Primary Formatting toolbar.

[youtube width=”800″ height=”450″]https://www.youtube.com/watch?v=V3reHwuEblY[/youtube]
If the video doesn’t appear above, you can watch it here. As an added bonus, as they come up, I’ll include Best Practices Tips. Tips that could apply to a variety of things such as SEO (Search Engine Optimization), section 508 accessibility compliance or things that just make good sense for a website. Look for the Best Practices Badge to pop up in the video.

First in a Series of videos about WordPress Basics. This video is about the Primary Formatting Toolbar, which works functions exactly the same way whether you are writing a Post or a Page in WordPress.  See the published post that was built in the video.

[Disclaimer: Theresa Carter, founder of The Local Tourist LLC,  is my fiancée. I love her and I am in love with her. But more than that I both admire and am very proud of her and her success. Read on and you’ll see why. These thoughts are my own.] I was perusing Facebook today and came on a “suggested post” (the screenshot you see here) by Sosh Chicago. It’s a pretty obvious salvo launched at The Local Tourist, whose company tagline is “Experience the fascination of a tourist; Feel the comfort of the local”. I saw that and thought to myself “She’s being recognized for her success!”. That may seem a little odd to you at first, but let me explain.

Who the Players Are

If you haven’t heard of Sosh Chicago yet, I wouldn’t be surprised. They first came to my attention about a month or so ago, when I saw they launched for Chicago. So I did a little research and by little, I mean I looked them up on CrunchBase. They’re based in San Francisco, CA, started in 2010. They have $16.30M in funding and “…Sosh is being built by Offline Labs, a stealthy startup founded by former Google and Slide employees.”. In other words, they’re very smart, they’ve got a lot of money and they can afford to move very quickly into a new market.

On the other hand, The Local Tourist started as an online business directory for the River North neighborhood in 2002 on a nonexistent budget. That’s not long after Theresa moved to Chicago and saw the need and saw she could fill it. Over the past 12 years, it’s grown organically to include all of Chicago by neighborhood and everything that’s happening in Chicago that you would want to know about. For most of those years, Theresa was the IT team, the Editorial staff, Sales staff and the Writing and Photography staff. While a good part of that has changed in the past few years, the Local Tourist still runs on a bootstrap budget.

While this does have a ‘David and Goliath’ element to it, that is not the point, by far.

Why This Shows Success

I don’t know about you, but if I was looking for a team to tell me who has the best market share in town when it comes to a web presence, a team of former Google employees would be exactly the group I’d want. And who did they find? The web arm of a National Media outlet? Nope, the home town, organically grown, bootstrap media outlet, The Local Tourist. That says success in my book.

So as a supporter of The Local Tourist and its success, I’d like to say thank you to Sosh Chicago for the compliment and kudos, but more than that thank you for taking time to research and find out what The Local Tourist is truly all about; The best Chicago has to offer.

I haven’t read anything about the Comcast Neighborhood WiFi hotspots issue, I just found this and decided to make an observation or three. I’m not sure how well this was thought through by Comcast…But I digress. Let me explain. When you start your internet service with Comcast, there is a physical installation of the transmission cables and you either pay a technician for that, or it’s already been done and you either pay to have the technician hook up the equipment or you can do a self installation. Regardless of the method, the physical cable has to be run in order for you to receive personal, protected (as much as possible), reliable Internet service.

Comcast is now taking that private, physical installation and making it a transmission site for a commercial WiFi hotspot that any Comcast customer can use without your permission or knowledge or ability to opt out, from what I can see [Update 2013-06-19:  I had a reader inform me that the customer can opt-out of the program and confirmed it based on the Mutlichannel.com article Cable Show 2013: Comcast Turns Wireless Gateways Into Neighborhood Wi-Fi Hotspots]. That Hotspot can’t exist if only the cable is there. There has to be a modem and router in order to broadcast, or distribute the hotspot signal. If there’s no Comcast customer there, there can be no hotspot.

Think of it like all the cell towers you see around you. While the companies own the equipment, it would be impossible for them to own all the land and buildings those towers are on, so they pay some sort of  combination of rental and/or access fees for their towers to be transmitting from those locations.  I don’t know of any compensation for Comcast customers and especially for those who own their own modem and router.

2. You’re providing an unpaid public endorsement  for Comcast by being a Neighborhood WiFi HotSpot

Funny story. I was going to use a photo of Captain Amazing (here’s a link to the results of a Google image search on Captain Amazing if you’re interested) from the 1999 Universal Studios film Mystery Men which is owned by Comcast, but couldn’t find a copy marked for free use. If I used one, it would be me distributing their product without a licensing agreement or compensation, which could be considered piracy, as opposed to them distributing their product using me as a distribution point without a licensing agreement or compensation which is considered…What now?

Anyway, you might ask how that’s a public endorsement? It goes hand in hand with the last thing…And I’ve saved the worst for last.

I went to the site and saw that you could search for HotSpot locations, so I did. I went to http://hotspots.wifi.comcast.com/ put in a zip code for a Chicago neighborhood and I got this result: 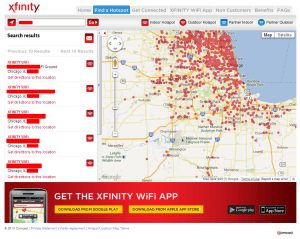 This was my first search and I noticed something about the first street address result and I left it uncovered in the picture above. It says Fl Ground, short for Floor Ground. That doesn’t sound like a business address to me, it sounds more like a billing address. So I went to  http://www.switchboard.com/ [UPDATE 2020-03-25: that URL now redirects to https://whitepages.com] and did a reverse address search and these are a portion of the result: 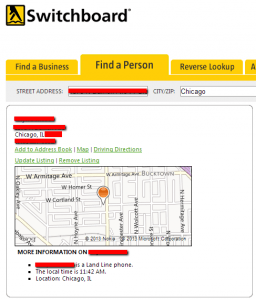 From two quick searches, I got these pieces of information:

And one last piece of never before publicly available information that ties all of this together in a scary and possibly dangerous way:

As I said in the beginning, I don’t think this was thought through very well and based on the information I was able to find out in less than 5 minutes using only widely available internet tools, Comcast might want to work on plugging some holes and soon. There’s a little place called Big Tony’s Pizza in the area. Yes, they’re a pizza place, but they also have Burgers, Italian Beef, Gyros and more.  There are some tables in the place, but I’d be willing to bet that most of their business is split between carry out and delivery. I tend to pop in, order and bring it home because I can run some quick errands after I order and be back in time to pick it up and I really like their burgers and Italian Beef a lot. It’s one of those “Ooo, you know what sounds good right now? A burger from Big Tony’s.” type of thing. But that’s why I started going there. Here’s why I’ll keep going there.

Not long ago I went in with Theresa and it was the busiest I’d seen it in there in awhile. I don’t think there was an empty table and people either ordering or picking up orders were 3 – 4 deep. We ordered and sat down and this time we decided to eat there. We were talking when I heard someone say something I couldn’t make out, but it made me look up just in time to see the man behind the cash register say “just a minute” to line of people three or four deep.  He turned and walked over to a physically challenged man in a wheelchair who had a couple pieces of pizza and a soft drink in a can with a straw and put the straw to the man’s mouth so he could take a drink and turned back to the cash register in almost one single motion. If I hadn’t looked up right then, or I had blinked, I would have missed it. A lot of the people did miss it. But there was also this moment of “you saw that, right?” bit of silence for those who did see it.

It wasn’t that it was the right thing to do, even though that’s exactly what it was, or that it was good customer service. It was those things and there was no complaint, no fanfare, not even a break in stride.

It was done without a second thought.

I don’t know about you, but a place that employs people with customer service like that gets my return business, period.  And it makes Big Tony’s Pizza a happy place for me.

This is an example of a photo cycle done using the NextGen Gallery plugin and the JJ NextGen JQuery Cycle.

I like to setup a single gallery for the photo cycle itself and all that needs to be done is upload the pictures to that gallery and it’s good to go. However, you can change how long the photos display, length of transition time between photos, display size of the photos and order of the photos. You can also set up links for each picture with a minimum of work.

Best of all is the ease of use to rotate pictures on an ongoing basis. You can simply add or remove pictures from your gallery and they automatically update in the cycle. No messing with editing or recreating a new file using any specific program, so you can show your best pictures at any time.